Garth's long-delayed album finally arrives with a strong collection of tracks that rivals some of the star's greatest hits.

Now settling into the part of his career where he can make albums just for the sake of it, Garth Brooks has delivered one of his better releases and certainly the best release since his comeback. Handling the production chores himself after longtime engineer Mark Miller produced the previous “post-retirement” albums Man Against Machine, Gunslinger, Christmas Together and Triple Live. It’s a great choice as each of those records featured choices which didn’t exactly suit modern sounds and while it could be a case of a great engineer (which Miller clearly is) just adding production duties to carry on Allen Reynolds’ legacy with Garth, it really felt like uneven production and here, on Fun, Garth lets the musicians roam a little bit and the production feels more suited to the earlier records with Fun, ultimately ending up in the Top five or so albums of his career (which has 16 studio records and 2 live releases and seven boxed sets).

Any fan of Garth will find instant familiarity to this record, a record he teased as early as two years before its eventual release. “The Road I’m On” was the theme song for and title of a documentary on A&E about Garth Brooks’ career and is a sturdy album opener and an obvious opener of his well-attended concerts. “Dive Bar,” a sturdy honky tonkin’ duet was a Top 10 hit for Garth and his duet partner Blake Shelton in 2019 while the previous album lead single “All Day Long” hit #11 on Billboard and #10 on the Mediabase chart. Finally, the other pre-release song was the sweet, “Stronger Than Me,” a love song which Garth performed acoustically to his wife, Trisha Yearwood, during the 2018 CMA Awards.

There are a pair of other duets on FUN, a cover of “Shallow” from the 2018 A Star Is Born film — where Trisha Yearwood gets to show off what a powerful vocalist she remains — and “Where The Cross Don’t Burn,” a socially-conscious story song about racial relations which features Charley Pride. That song is another in a long line of song choices that many country stars deliberately steer clear of but Garth is unafraid to challenge.

Garth takes us to church on the fantastic “Amen,” complete with soulful chorus and Memphis-like horns and rhythmic vibes while he feels a little “rough” vocally on “The Courage Of Love,” another song where his emotive chameleon-like vocal style showcases why Garth became THE star in country music. He’s authentic, he’s believable and he showcases that even more with “That’s What Cowboys Do,” the emotive closer “(Sometimes You’ve Got To Die To) Live Again and the jovial “Party Gras,” a cousin to Garth’s early hit “Two Pina Coladas.” 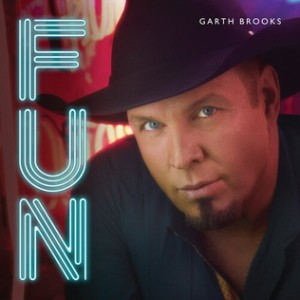