Singer/songwriter's solo debut record has universal critical acclaim and is one of the best albums to be released in 2015, if not the best one so far (as of August 2015). Singer Appears on Late Night With Seth Meyers tonight.

It’s not the end of the year but we can declare that the Dave Cobb-produced solo debut from the songwriter behind hits like Kenny Chesney’s “Never Wanted Nothing More,” Luke Bryan’s “Drink A Beer,” Thomas Rhett’s “Crash And Burn” and many, many more album cuts. He also was once the vocalist to the IBMA winning and Grammy Nominated band The SteelDrivers prior to his tenure with Mercury Nashville.

Much like former label mate Jamey Johnson, Stapleton makes music that is for adults. And with titles like “Whiskey and You” and “Might As Well Get Stoned” amongst Traveller’s delightful fourteen tracks, that point is well proven. Most of the album was written or co-written by Stapleton but there are a pair of choice cover songs in George Jones’s Dean Dillon/Linda Hargrove-penned “Tennessee Whiskey” and the Don Sampson-penned “Was It 26,” a deep cut from Charlie Daniels that suits Chris Stapleton’s powerful rasp. As good as these covers are, it really is Stapleton’s own songs which give Traveller its depth. From the title track to the rockin’ love song “Parachute to the stunning observational piece “Daddy Doesn’t Pray Anymore,” Chris Stapleton reels in the listener and keeps them on baited breath to hear every vocal tic, every instrumental nuance and by the time he gets to the closer “Sometimes I Cry,” you’ll soon be wanting to hit repeat to listen to the whole album again.

Passion comes forth through the introspective tracks “Traveller,” “Nobody To Blame” and “When The Stars Come Out,” the latter of which was co-written with Grammy winning singer/songwriter Dan Wilson. When listening to Traveller, it’s really easy to get lost in the music and that, friends, is what makes the album such a compelling record to listen to and something that should be on everyone’s radar, country music fans or not.

NOTE: YOU CAN WIN A COPY Of TRAVELLER AUTOGRAPHED BY CHRIS STAPLETON. Just Leave A Comment below to enter to win! 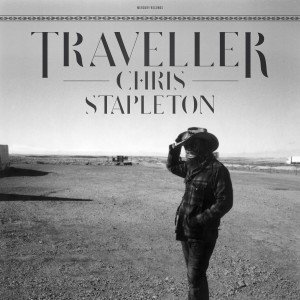