Country/Rock Icon Linda Ronstadt was honored with one of the USA's highest Presidential honors an entertainer or civilian can get.

American Roots/Country/Rock icon Linda Ronstadt was presented with the National Medal Of Arts at a White House ceremony last week. As President Barack Obama hung the medal around her neck, he quipped "I had a little crush on her back in the day."

A military aide brought Ronstadt into the East Room by wheelchair, but she walked to the stage to accept her medal. Ronstadt was honored for her "one-of-a-kind" voice and for influencing generations of female recording artists.

Eleven other recipients were also awarded with the 2013 National Medal Of Arts - the nation's highest award given to artists and their patrons. Other honorees included DreamWorks Animation chief Jeffrey Katzenberg and Dominican-American writer Julia Alvarez. Ten others were awarded the National Humanities Medal, which honors those in fields including history, literature, languages and philosophy.

Previously, Ronstadt was inducted into the Rock And Roll Hall Of Fame this April, but was unable to attend the ceremony due to the limitations brought on by Parkinson's disease. 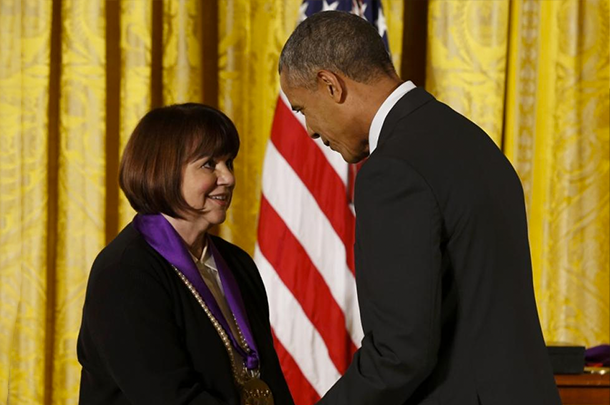 Ben Foster is a freelance Country Music journalist in Russellville, Kentucky. He first began writing about Country Music with his own blog The 1-to-10 Country Music Review. He has been writing for Roughstock since 2010 and also contributes regularly to Country Universe.