Kenny Chesney worked hard the past year or so to deliver the best album he possibly could. Today he's revealed the cover to the new album featuring "American Kids."

Kenny Chesney's latest single, "American Kids," is screaming up the country singles chart, and now, he is giving fans one more thing to get pumped ... The album cover of his forthcoming project, The Big Revival.With an eye toward fresh and different, Chesney wanted an album cover to reflect just that. Not what was expected, not obvious marketing, or even keyed on any of the obvious notions of who he is. As he says, "I wanted a cover that was surprising... that suggests anything is possible. No matter where you are in your life, how tired or lost or demoralized, with a little faith and a little help, anything’s possible. Because it’s all within you. Or me.”The end result is a portrait of the bus from his freewheeling “American Kids” video, a vehicle both loaded with meaning and recast in ways that defy description. Transformed by the crazy paint job Chesney himself helped create, the bus becomes a transport to a world where everyone can explore their potential and celebrate being alive."That was the thing about the bus," he explains. "It was so far beyond coloring outside the lines, yet what’s more common than a school bus? We've seen them our entire life... Yet, when you look at that bus after we were done painting it, it was a whole new notion! That’s what I think everyone is striving for: be who you are, but be the person we dream, not end up.”Shot by emergent photographer Allister Ann, the cover suggests that within what we know, there are places we still haven’t imagined. All we have to do is look a little closer, then get ready – as the title suggests – for the Big Revival within us."I think that's the thing about the songs on this record... about the attitude and energy in 'American Kids'... it's not the same old," Chesney says. "It's not what you expect... It's what can be. Asking 'how far can you take it?,’ no, it's 'how far do you wanna take it?!' To me, that's what we sometimes lose sight of, not even how great this life is and can be, but all the things we don't even consider -- and that's where the real thrill of being alive is.“So rather than another picture of me, I figured, let’s throw open our imaginations," he continues. "Let’s see what the bus, ‘American Kids’ and the rest of the songs can mean. Look at the bus -- No! Get on the bus... and take the ride for whatever it is you dream.”The Big Revival arrives in stores and online September 23. 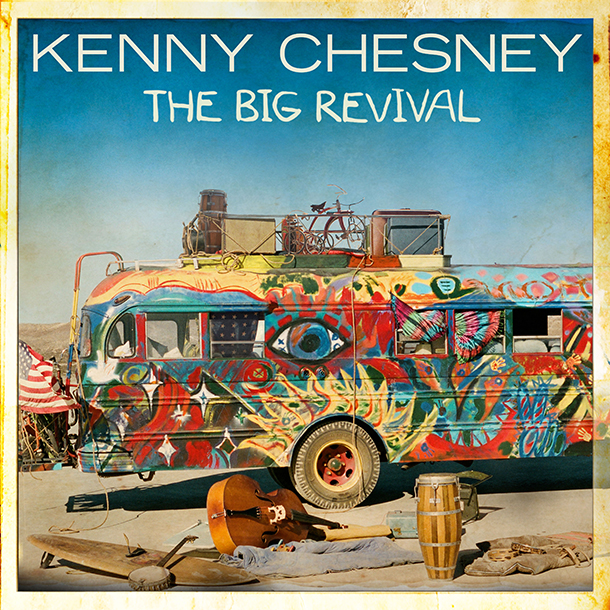